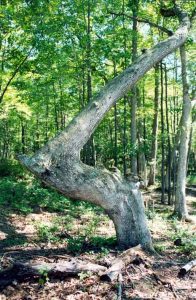 As you enter the main drive leading into the Glen at Irish Springs you are greeted by a living piece of history. Just beyond the entrance you will find an Indian Arrow Tree. This tree is a living testament to the Huron Indian Tribe who formed it.

It is believed by many that this tree is the last remaining direction tree grown and shaped by the Huron Indian Tribe. It would have been formed to provide direction as the tribe migrated from the Bay City region to the Port Hope region each summer. Direction trees would have been shaped by tying the tree with the sinew of an animal to form its unique arrow shape when the tree was a small sapling. In the spring as the tribe traveled east they followed the arrow and in the fall they followed the direction trees in reverse to return to the Bay City area for the winter.

Most of the trees were lost in the great lumber fires of the past years or were cut down during logging operations.